Robert Olen Bulter Writes Word by Word before My Eyes

I'm watching a Pulitzer Prize-winning fiction writer as he creates a short story, beginning to end. I'm only up to Episode 2 in this 17-part video series by Robert Olen Butler. Butler is the type who re-reads and revises word by word, sentence by sentence, paragraph by paragraph and so on, as he goes along. (Not a fast / rough draft and then later revision.) He describes fiction as coming from the dream state, not the conscious mind. Says a writer must enter a "zone" or state of meditation that accesses the writer's "dream center." However, he clearly allows his critical / analytical mind significant participation in the creation of the text. It's a contradiction which is clearly working for him. Maybe it works for Butler because he is primarily conjuring the voice of the narrator and imaginatively experiencing the sensory details of what the character is experiencing like a "method actor." The secondary issue is surface text--the right words in the right order.

Posted by Keith Badowski at 10:10 AM No comments:

April Events at the McCullers Center

The Carson McCullers Center is hosting two great events over the next couple of weeks:

Friday, April 20th at 7 p.m.
The Mystic Order of the East Alabama Fiction Writers will give a reading from their new collection, Be the Flame, published by local press, New Plains Press.The Mystics are composed of a group of six women bound together by their interest in the visual and literary arts: Margee Bright-Ragland, Gail Langley, Judy Nunn, Joanne Camp, Marian Carcache, and Mary Dansak. The Mystics will sign books, and a short reception will follow.

Friday, April 27th at 1:30 p.m.
The English Faculty Lecture Series features Dr. Nick Norwood, CSU Professor of Creative Writing and author of the recently published poetry collection, Gravel and Hawk. Dr. Norwood will read from and speak about his poetry, and coffee and cake will be served. For more on Dr. Norwood's new collection, visit here: http://www.ohioswallow.com/book/gravel+and+hawk.

We hope to see you soon!

Thanks, always, for your support,

The University of Georgia's award-winning journal The Georgia Review and the recently opened Bowers House Literary Center in Canon, Georgia, are sponsoring a reading by, and up-close conversation with, writer Terry Kay at the Bowers House on Saturday, April 21, from 2:00-4:00 p.m. A tour of the historic home, originally built as a hotel nearly one hundred years ago, will be offered at 1:30 p.m. Both the tour and the reading are open to the public free of charge.

Terry Kay, a Hart County native who currently makes his home in Athens, is the author of some fifteen books—among them eleven novels, a collection of essays, a children's book, and a recently released volume of short stories, The Greats of Cuttercane.

Three of Kay's novels have been produced as Hallmark Hall of Fame movies: The Runaway, The Valley of Light, and his best-known work To Dance with the White Dog—the last of these starring the famous acting couple of Hume Cronin and Jessica Tandy.

Readers around the world can find Kay's books translated into more than twenty languages; most notably, To Dance with the White Dog has sold some two million copies in Japan.

After Kay's reading in the house's spacious living room/parlor, Georgia Review editor Stephen Corey will moderate a conversation between Kay and the audience. A reception will follow, during which attendees may enjoy their refreshments while walking the grounds or sitting on the first- and second-floor wraparound porches.

The Bowers House Literary Center is located in the small town of Canon, four miles north of Royston and a pleasant thirty-five drive north of Athens; just a few miles from I-85, the house is easily reached from both Atlanta and the Greenville-Spartanburg region of South Carolina.

Thanks to owner Laura Bowers Foreman, herself an active writer, the Bowers House's two-story, 4,000-square-foot, seven-bedroom space is now dedicated to the service of writers and lovers of good writing. The house is available for a variety of programs, from a brief gathering such as the Terry Kay reading to day-long festivals or multi-day conferences. Individual writers, as well as small groups, can take up residency in the Bowers House, for anywhere from a few days to several weeks, for modest fees—all of which go to support the mission of the house. Also, ongoing workshops and classes are currently being conducted by Sandra Scott and others. For further information, including driving directions, visit www.thebowershousewriters.com or e-mail to bowershousewriters@gmail.com.

The Georgia Review, published quarterly at the University of Georgia since 1947, features short stories, poems, general-interest essays, reviews, and visual art by the famous and the newly discovered. Winner of National Magazine Awards in both the fiction and the essay category, and a recipient of the Georgia Governor's Award in the Arts, the Review has a long tradition of sponsoring and cosponsoring reading events on the UGA campus and in the Athens area. For more information, go to www.thegeorgiareview.com or call 706-542-3481.

Posted by Keith Badowski at 6:53 AM No comments:

Posted by Keith Badowski at 5:38 AM No comments:

Marillion News From The Studio

Posted by Keith Badowski at 3:41 PM No comments:

The Alabama State Poetry Society is accepting submissions for the Annual John and Miriam Morris Memorial Chapbook Competition. Deadline is May 31, 2012.

Travel writer, memoirist, and novelist Mary Morris, who teaches a workshop called The Writer and the Wanderer at Sarah Lawrence College in Bronxville, New York, likes to send her students on field trips to light the creative torch. "I like to get my students out of the house, and a little out of their heads," says Morris, whose most recent book is the memoir River Queen (Holt, 2007). "Go away. Listen. Eavesdrop. Find something new. Bring back a souvenir. What do you take with you? What do you leave behind? Sit outside in one place until a story comes to you." Follow Morris's guidance: Go on a field trip of your own, and discover the wanderer within you.   From Poets and Writers E-Newsletter.

The Chatthoochee Valley Writers are planning an opportunity for you to do just that. Register today by going to our website or replying to this email ! 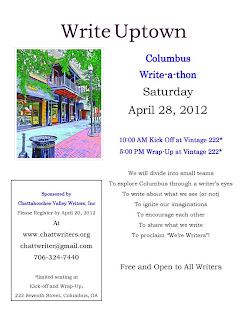 Posted by Keith Badowski at 6:16 PM No comments:

Register Now for our

We will divide into small teams

To explore Columbus through a writer's eyes

To write about what we see (or not)

To ignite our imaginations

To encourage each other

Free and Open to All Writers

Posted by Keith Badowski at 10:51 AM No comments:

Register Now for our

We will divide into small teams

To explore Columbus through a writer's eyes

To write about what we see (or not)

To ignite our imaginations

To encourage each other

Free and Open to All Writers

Posted by Keith Badowski at 10:51 AM No comments:

Time to Write and Win!

TIME TO REGISTER FOR THE SOUTH'S

OLDEST, MOST HELPFUL WRITERS'
CONFERENCE!
TIME TO SUBMIT YOUR MANUSCRIPTS
TO THE CASH-AWARD AUTHORS'
CONTEST!
Click here:
http://alabamawritersconclave.org/
&
Check out the latest issue of Alalitcom
at
www.alalit.com

Winners of the Alabama Writers' Conclave 2011

Posted by Keith Badowski at 10:47 AM No comments:

Keith Badowski
Phenix City, Alabama, United States
Keith Badowski studied English Lit at Southern Illinois University, Carbondale. His love for poetry emerged during work on an undergrad degree in English at SUNY New Paltz. He currently serves as a minister at Epworth United Methodist Church in Phenix City, AL. In 2009, he began a stint as President of the Georgia Poetry Society and co-founded Brick Road Poetry Press (with Ron Self). As of July 2016, he has turned his writing efforts to fiction and is fumbling through the process of writing a novel. He dearly loves his wife, Christina, and thoroughly enjoys reading novels to her in the car while she drives.